The largest derivative is polyvinyl acetate (PVA) which is mainly used in adhesives as it has good
adhesion properties to a number of substrates including paper, wood, plastic films and metals.
Other uses for PVA include paper coatings, paints and industrial coatings.

The second largest consumer of VAM is polyvinyl alcohol (PVOH) which is manufactured from
PVA. Main uses for PVOH include textiles, adhesives, packaging films, thickeners and
photosensitive coatings.

A fast growing use of VAM is the manufacture of ethylene vinyl alcohol (EVOH) which is used as a
barrier resin in food packaging, plastic bottles and gasoline tanks, and in engineering polymers.
It is estimated that approximately 80% of global VAM production is used to make PVA and PVOH,
with most of the remaining volume going to PVB, EVA copolymers and EVOH resins.

The following key point defines how VAM market is expected to growth substantially: 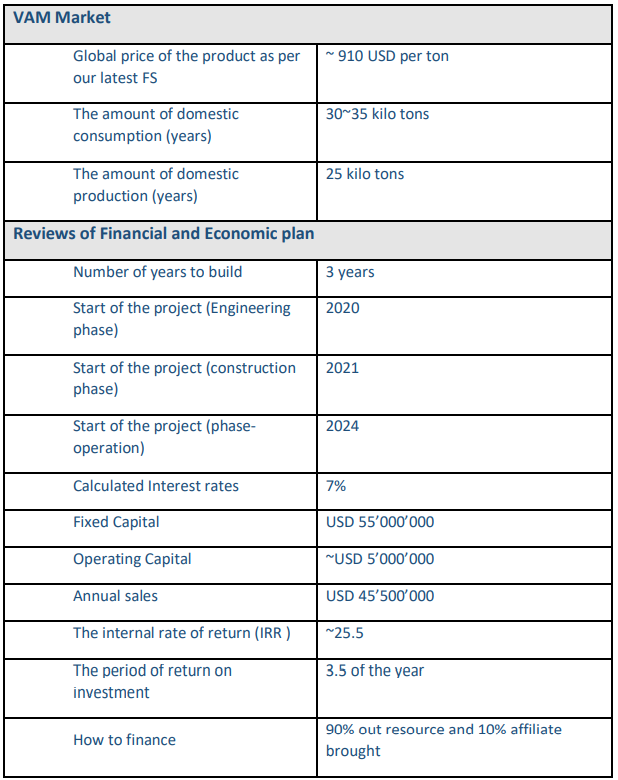 As a brief, the global EVA market projected to be worth up to USD 9.71 Billion by 2020,
registering a CAGR of 3.5% between 2015 and 2020. Off course, the market for EVA has been
categorized based on type, application, end-use industry and region, and it includes forecasts for
market size growth and analysis of trends in each of the submarkets. 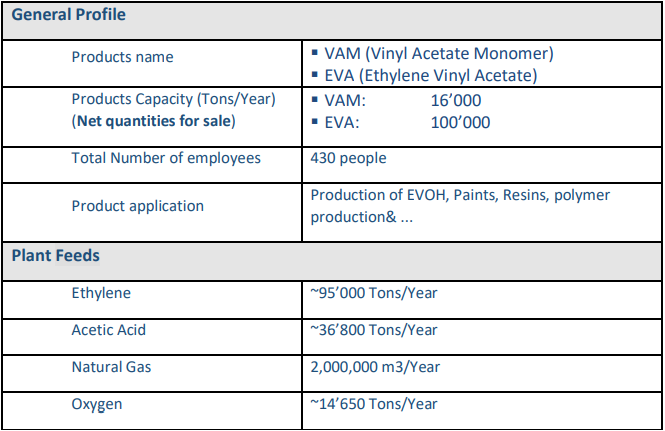 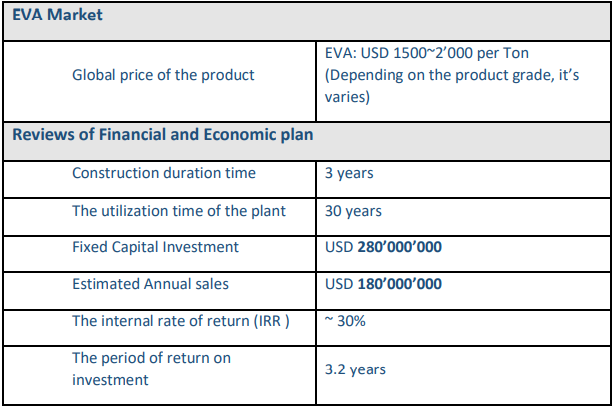 At this moment, the following accomplishment has been completed:
− “Feasibility Study” for VAM; performed by well-known/ trustable company
− Purchasing more than 50 Hectare land, located in strategic area with multiple advantages and near to Gachsaran Ethylene plant
− Establishment license from Ministry of Industry and Mining
− Getting the Ethylene Feed permits for first phase
− Getting the Utility permits (NG, Water and Electrical Power)
− Getting Environmental permits
− Obtaining governmental and provincial permissions
− Financing arrangement now is under progress. It is expected to be finalized at 2021
The Land is being prepared and grant of Licenses is in progress.